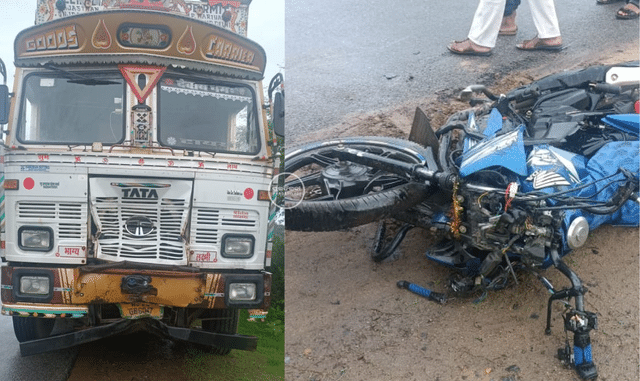 Nuapada: At least four people, including a minor, were killed and a woman was seriously injured after the motorbike they were all traveling in was hit by a cargo truck on the NH-353 between Udyanbandha and the village of Krishna in the district of Nuapada.

Reportedly, a couple and their minor child, from Hatisari village, along with two other relatives were on their way to Sanbahali village within the limits of Komana police station when a high-speed truck hit them from full force.

The collision was so intense that the man and his two brothers-in-law died at the scene and his wife and minor child fought for their lives.

The injured were immediately rescued and transported to Komana Community Health Center (CHC) in a 108 ambulance. However, the minor succumbed to his injuries at the CHC and the woman was transferred to Bhadrak DHH as her condition worsened. .

Later, Komana police seized the ill-fated truck and bike from the scene of the accident and launched an investigation to determine the circumstances leading to the fatal accident.

The Green Car Manifesto Nobody Asked For

Practical, fun to drive but still a work in progress