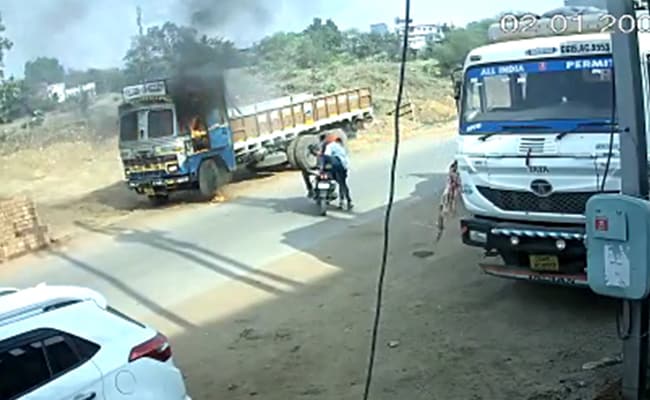 The incident happened near Anand Dharam Kanta in Kota town of Bilaspur district.

A truck owner has accused the driver of setting fire to the vehicle in Bilaspur district, Chhattisgarh to settle a score with him. Video of the alleged incident has surfaced online and shows three men setting fire to an empty lorry, parked by the side of the road, in broad daylight.

The video, captured by a CCTV camera in the area, showed three men crossing the road towards the truck. Two of them sprayed fuel inside the driver’s cabin as several vehicles passed.

After spraying fuel, one of the men lit the truck into a ball of fire. The man was startled by the force of the fire, which rushed towards his face. He backed up in time to save himself and left with his accomplice on a motorcycle. The third man could no longer be seen in the video.

The incident happened near Anand Dharam Kanta in Kota town of Bilaspur district. While none of the commuters stopped to check on what was going on, there was some commotion in the area after the truck started burning and belching black smoke into the sky.

Police have opened an investigation into the incident and are looking for the driver, who has been on the run since the incident.

More than 1,300 unaccompanied learner drivers have had their cars seized so far this year