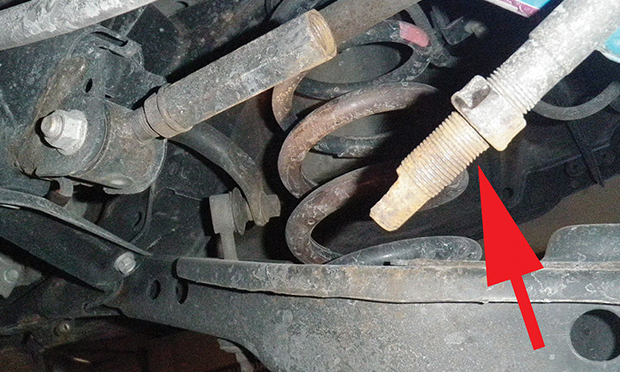 Drivers frequently claim that their vehicle suddenly tipped to one side, resulting in an accident. Occasionally, the cause may not be the fault of the driver. This case study illustrates this point. According to the insured, she was driving at the speed limit when her vehicle suddenly swerved, causing loss of control and hitting a wall head-on.

Figure 3 shows the threaded end of the tie rod that has come loose. Close inspection of the threads on the right shows that the crest of the threads is distorted to the right. This suggests that excessive force was pushing the adjusting nut to the right. The locknut has a chisel groove, suggesting that someone was trying to loosen the locknut by turning it counterclockwise. This nut and screw have a left-hand thread, which means that by turning counterclockwise, the jam nut is tight against the adjusting nut.

Apparently, excessive torque was applied to the locknut, which damaged the threads under the adjusting nut. Due to the normal load of the tie rod due to the traction of the drive wheels and variations in the road, the tie rod eventually separated from the threaded connection, causing severe misalignment of the right wheel and loss of vehicle control.

The main cause is excessive torque applied to the locknut, which damaged the threads in the adjusting nut area. This is an incorrect setting procedure. The vehicle’s suspension had recently been realigned at a local store.

The worst conditions for drivers after a car crash or theft