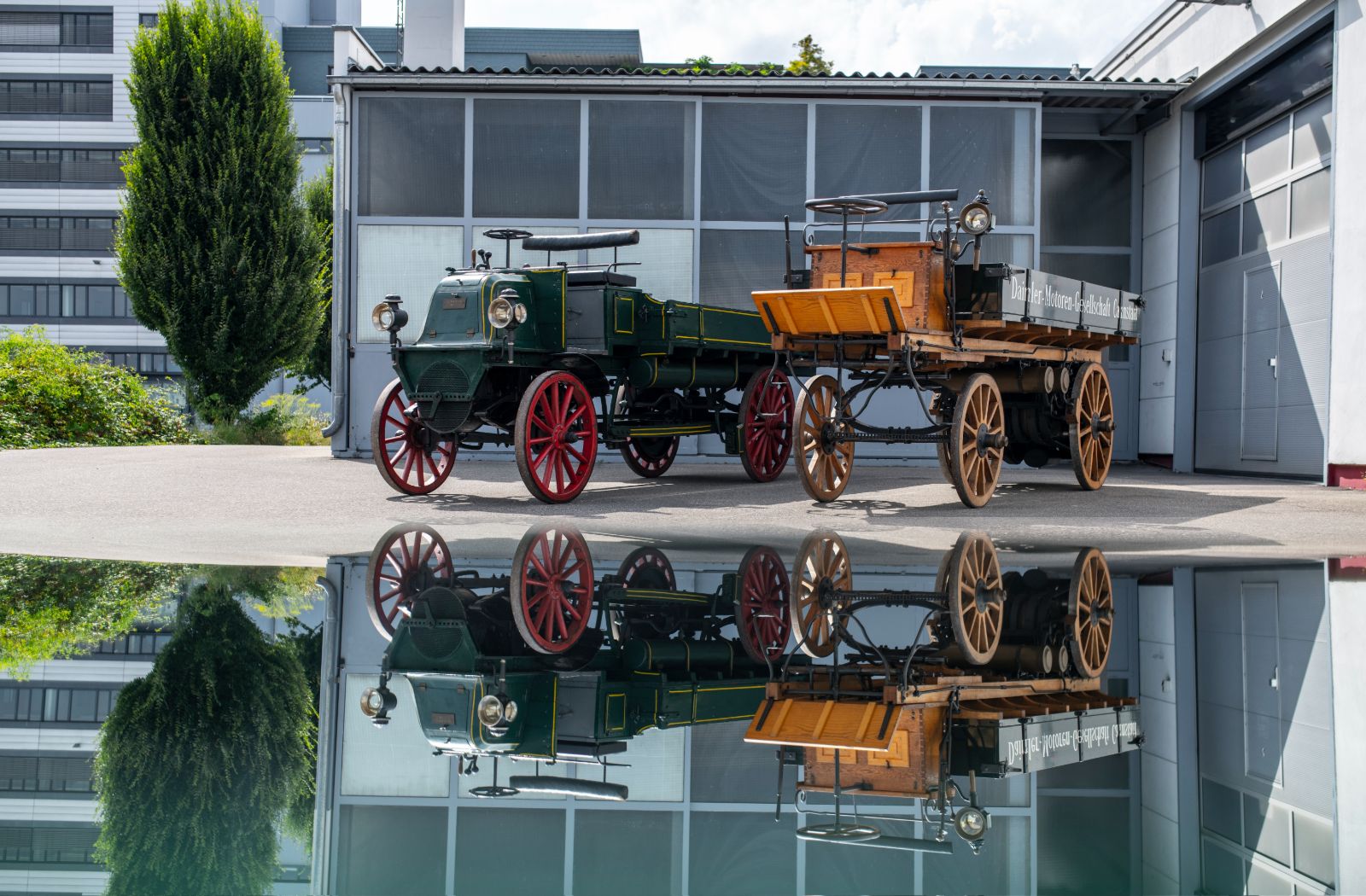 125 years ago, the world’s first truck made its public debut. This is his story

Sitting on four wooden wheels covered with iron, it looked more like a cart without the drawbar that would normally be attached to oxen, horses or mules. Instead of depending on animals, this revolutionary vehicle used a rear-mounted two-cylinder four-stroke engine called the Phoenix.

Designed by Maybach, Daimler and his son Paul in the garden lounge of the former Hermann Hotel in Cannstatt, the unit moved 1.06 liters and produced 4 hp. It featured four block-molded cylinders arranged vertically and parallel, camshaft-actuated exhaust valves, glow-tube ignition and a spray nozzle carburetor. Mounted behind the rear axle, the Phoenix drove the rear wheels through a four-speed belt drive.

It was designed to run on gasoline, but since refined fuel was not very common at the time and had to be purchased from a local chemist, the engine could also run with more widely available alternatives such as coal gas and fuel for lamps. According to Daimler records, when gasoline was used, fuel consumption was around 39 mpg (6 liters per 100 km) and top speed did not exceed 7.4 mph (12 km / h).

At the rear, two coil springs helped protect the vibration-sensitive powertrain. Apart from these, transversely mounted fully elliptical leaf springs were fitted at the front, improving the vehicle’s ability to navigate the rough roads of the time.

As with horse-drawn cars, the driver was seated in the front on a wooden bench and could maneuver the truck using a steering wheel connected to the front axle by a chain drive.

A manually operated block brake that locked the rear wheels was used to slow the vehicle. Additionally, a foot-operated shoe brake provided additional stopping power by engaging the countershaft.

Another notable innovation of this iconic machine was the use of a planetary axis, a component still widely used today.

In October 1896 a modified version was sold to the British Motor Syndicate in London. The engine was moved forward, under the driver’s bench, and could produce 6 hp. In the coming months, Daimler-Motoren-Gesellschaft (DMG), the company founded by the two manufacturers, was the first car manufacturer in the world to launch a range of truck models in four different power levels.

In 1897, the engine displacement was increased to 2.2 liters and its power increased to 10 hp thanks to a new low-voltage magneto ignition developed by Bosch and a new radiator designed by Wilhelm Maybach.

Another two years passed until the Lastwagen finally began to establish itself in the German market. It has become the vehicle of choice for several local businesses, including the BohÃªme brewery in Berlin.

DMG would start producing trucks on a larger scale from 1914 and its main customer would be the German army. At that time, vehicles developed 30 hp, were equipped with drum brakes and were mounted on rubber tires.

From that point on, gasoline trucks became an integral part of the company’s portfolio, helping it survive the two world wars and paving the way for modern trucks which are now available in many sizes and configurations.

To commemorate Lastwagen’s 125th anniversary, Mercedes-Benz Trucks loaded a replica of the original 1986 model as well as an original 1898 variant into a modern Actros semi that recreated its ancestor’s journey, arriving in London on August 18.

Branded Content: New Cars You Can Buy This Holiday Season